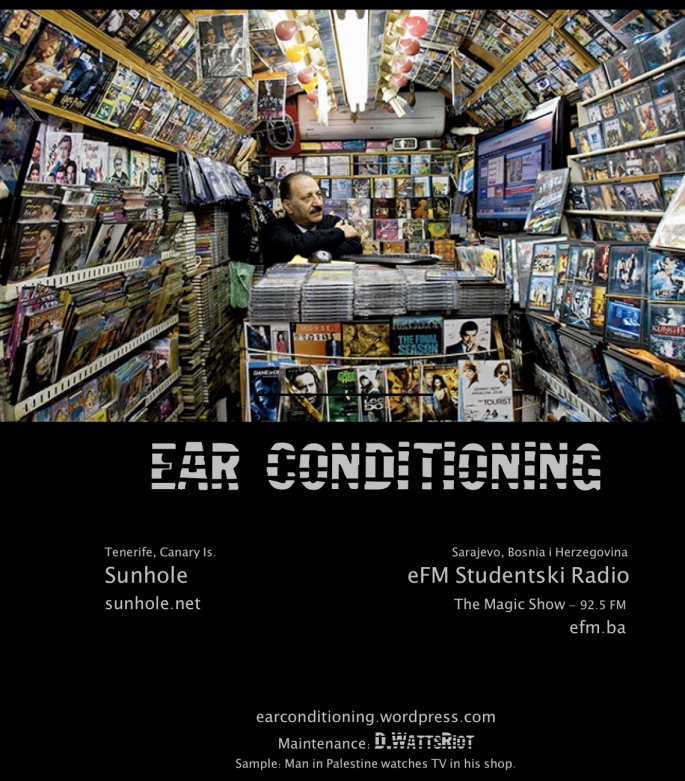 I very much appreciate both Tanin at Sunhole and Emil of the Magic Show at Bosnia’s eFM radio station taking my weekly transmission from these parts.  Coming up in the next few weeks will be further collaborations with the two stations, as I’ll be presenting the Magic Show within the Ear Conditioning slot every now and then, giving my listeners an indication of what’s being felt in Sarajevo.  On occasion, our brothers and sisters in Sarajevo will get a further dose of what goes down at Sunhole via Tanin’s program.  More as it happens.

eFM was  founded by the UN mission in 1997, using equipment that saw time in Somalia.

Stepping into a former war zone is nothing like it is on television news.  It’s encompasses all your surroundings, 360 degrees, not a flat one dimensional image on a 23″ screen.  A heavy heavy cloud of depressing dread hangs over the city.  My first experience of this was in Lebanon in 1991 with Les Negresses Vertes, who performed in Beirut eighteen months after general hostilities ended.  “This is the spot from where Terry Waite was kidnapped.” said our guide.

Like Beirut, Sarajevo’s buildings show the scars of war,  an indicator of what the population has endured, unsightly holes that shouldn’t been there, a crumbling, shattered, bombed out, devastated environment.

eFM try to bring some normality to the lives of the people who have experienced the un-imaginable.  Sarajevo is a naturally beautiful place and it’s citizens feed off it when they can.

Thanks to Emil Prutina/Magic Show for sharing Ear Conditioning for the people dem.  Hit here for live streaming full range of beats from Sarajevo,

On asked why his program is named so, Emil replied with the following link: