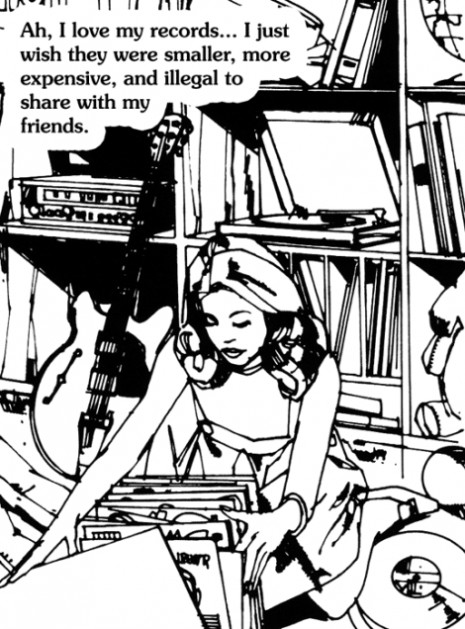 The move to digital, embracing technology, sticking with the old.

Who gives a shit?  Use what you got, what ever gives you a woody, just get your message across.

Many different schools of thought, must be as many of them as there are DJ’s, and you know there are tons of us out there.

One of the things I like about using vinyl is when asked, “What was that last track you played?”, I can whip out the sleeve and show them.  They can step into the world of the artist, get a broader picture that goes along with what they heard a minute ago.  Encounter a new name, style, band, artist, producer, label, artwork designer, etc. They may see a familiar or re-occuring name and add another piece to a link they are forming.  We come across some much this way.  I learned that Kevin Metcalfe is a really good mastering engineer, ‘cos Adrian Sherwood / On-U Sound always has him cut his records.  So, if I’ve got a track, album project that has reggae, hard twisted funk sensibilities, I know who to get in contact with or recommend.  If your doing bass-led music, you need to speak with Jason at Transition for the best cut sound.

Whose that drummer, guitarist, thumping bass player?  Don’t get that with an mp3. Read here what Brian Eno has to say on the subject.

“So, everything is a different way of listening. But also I think that there’s something that I still like about the fact of a package, like the latest report from somebody. “Okay, this is what they’re up to now; this is what they’re doing; who’s working with them?” It infuriates me that stuff from the Internet routinely doesn’t include all the credits. Because as soon as I listen to something, if I like it, I want to know, “Who’s the bass player?” “Who did that?” “Who’s the engineer on this?”

Parliament / Funkadelic albums have stories, concepts within the cover, artwork by Pedro Bell and worked the space of an album sleeve to their advantage.  Put that record on, sit on the couch and read, become engrossed in the tales of Dr. Funkenstien and Sir Nose’Dvoid of Funk.  Don’t get that with mp3.

Spinning with Traktor, and some one asks about the music, just gotta write the name down on a napkin or toilet paper and hand it to them.

On the other hand, I’ve been booked for several events where I’ve turned up to do the do, and what do we have here, the first ever Technics 1200’s.  They are old, battered, at least one leg missing – oh that’s great for scratching thanks.  Oh, and the mixer, where did you find this, under your grandmothers skirt? My rider said a four channel mixer, not two lines sharing line/phono inputs. Then, like a knight, Kevin Martin turned up to spend a weeks holiday and he brought a a gift, a Vestax VCI DJ controller.  Now, when I ain’t sure of what’s going to be on offer, I take the mac and Vestax, use Traktor.  “All I need is to plug in left and right outputs to your DI boxes, thank you.”  is what I can now say to the soundman.

An agent once told me I didn’t get a certain gig because the promoter wasn’t sure if he would be able to get the turntables and mixer that I requested on the event day in question.  Sounds a bit strange to me, however, I won’t have to go through that again.

In the week that Panasonic announced the end of the production road for the bedrock of DJ’s, the Technics SL1200 turntables, Mr. Scruff had something to say in The Guardian,

“Everyone said: “You can put jam on your CDs, you can put peanut butter on them,” because they were supposedly so durable (although you could fit far more jam on a record!). I have a real problem with these “one format v another format” debates. It’s like books v newspapers, or a plate v a cup. I quite like to use both.

Saying that, one aspect I’ve noticed with software-based DJing on programs like Serato and Traktoris that, because you can carry so many, you tend to play whole tunes much less. People are playing 30 seconds of a track and skipping to another one. It almost seems like people get attention deficit disorder when they’re DJing. It’s very old school but I’m a firm believer that, if something’s good quality, I want to experience all of it – whether it’s a good meal, a good film or a good piece of music. I think if a record’s good, it should be listened to all the way through”.

The debate, though not a serious life-threatening one, continues.

Speaking of digital, I’m now posting the Ear Conditioning radio program on mixcloud, hopefully I put up a show a week after it’s been broadcast at Sunhole and new friend The Magic Show at eFM / Radio Sarajevo.  First up is Ear Conditioning 35 – Different People Stroke it Different.